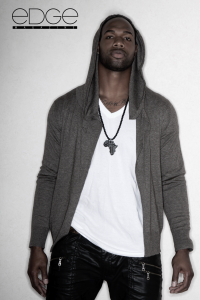 [/frame_right] Jacksonville Jaguars’ tight end, Marcedes Lewis, is just ending what he would agree has been his best season in the NFL since his arrival in 2006, but he is not hoping to be remembered for his standout Pro Bowl season. In fact, Lewis’ focus from the very beginning of his journey has been to simply make a difference with the life he was so selflessly given 26 years ago.

Born in Long Beach California to a young mother, it was his Mother’s strength that has given Lewis courage over the years. Much like his mother, Marcedes’ dedication to having a better life has kept him moving forward at every fork in the road. Blessed with an incredibly tall frame, he stands at 6’6, Lewis was always athletic and despite his height that was more that of a basketball player, he fell in love with football at an early age. It was not until middle school that a coach first approached Marcedes about possibly using his size to acquire attention as a basketball stand out. “I didn’t mind taking on both because I knew football, it was something that came easily to me,” Lewis says, “but if there was a way to get attention through basketball too—I figured I’d do both.” And his decision paid off when he was awarded scholarships in both basketball and football to UCLA in 2002.

After two years of splitting his time and talents between two sports, Marcedes Lewis found himself in a situation that neither he nor his Mother were pleased with. “I was missing a lot of class and my grades were slipping, it was just too much,” Lewis explains “My Mom thought I should give up basketball and at first I didn’t want to do it. I figured I could just buckle down more and get it done,” he said. The decision he ultimately made to focus solely on football for the rest of his collegiate career helped him to win the John Mackey Award for best tight end in college football, making him the only athlete in UCLA history to receive the honor, as well as ranking him first amongst UCLA tight ends with a recorded 1,571 yards receiving and 21 touchdowns. The icing on the cake, however, came when he was selected 28th in the 2006 NFL Draft by the Jacksonville Jaguars for a 5 year, $7.5 million contract. “Getting drafted was kind of surreal because you dream about it your whole life and more than that—I got to make my family proud. That’s big time. That pushes you to keep going forward,” he says.

It would be important for Lewis to remember his hard work to that point when, in preseason, he suffered a high ankle injury and when he later came back he did not live up to expectations. “Coming out of college I caught more passes. I was used a little differently when I got to Jacksonville; they’re a run-based team so I was forced to do more blocking than I’d anticipated,” Lewis explains. Never losing sight of his ability to overcome trials, Marcedes set out to prove that he could fit into the new style. In 2008, Jacksonville suffered various losses due to injuries on their offensive line leaving Lewis with an opportunity to show that he could be the tight end everyone was expecting him to be. He impressed his coaches and learned a valuable lesson about hard work in this league. “It’s better when a person takes the stairs instead of the elevator, a lot of people take the elevator to the top and they get there and don’t know what to do so they fall off,” he explains with a maturity of a veteran twice his age. “When you set the foundation and know what it takes to get there, you’re going to know what it takes to stay there,” he says.

Lewis’ consistency in success on the field led him to match the Jaguar’s touchdown receiving record and also earned his selection to his first Pro Bowl this season and things have kept getting better. The Jaguars have franchised Lewis and he is gearing up for what he says will be an even better season. But it is not only Lewis’ play that makes him a stand out in the league. There are many hard workers. Many guys that share the same story of a life in many ways saved by an athletic talent. But the real quality that Marcedes has shown since his rookie year is an incredible maturity and understanding of a blessing giving that can be taken away in a blink of an eye. “The NFL stands for ‘not for long’ and it happens that way. You have to understand that it’s a business. Yes, it’s a privilege to play the game but at the same time you have to use it as a platform,” he explains. “A lot of guys bring where they’re from to their job. They want everyone to think that they’re still cool and still down but in actuality they’re messing up their life. Their no longer focused on their job, now their back in the same place—the place they have been trying to get out of.” Lewis said. This awareness has trickled into his ability to be the best at his position on the field by making him focus on the things that many players take for granted. When we talked about the changes he made to be able to play at his highest level, he gave what he says is an intangible to any young athlete, “Your diet. So many guys eat themselves out of the league. So that was a big focus of mine. I watched it happen to some of the guys who came before me and I pride myself on learning from the mistakes of others.”

Passing on lessons is something that the Pro Bowler has become committed to during his time with the NFL. After starting a Foundation, run and operated by his Mother, Lewis decided to open the Marcedes Lewis Football Camp, a camp that offers free-top-of-the-line training to the youth of his hometown in California. The importance of the Camp to Lewis is to give kids an opportunity that he never got at their age. “They get to work with great coaches and great players from this league and learn fundamentals of the game,” he says. “But more than that, it’s a human relations camp. They learn, along with their parents, about what’s going on in the streets and what not to get involved with and I think that’s important,” Lewis said. Being someone whose story could have ended up a number of different ways, Lewis knows that his life has to mean more than just stats, “I always tell people, the only thing I can promise to you is that I will always be a positive force in your life. God has put me into lives for a reason and I always want to be fulfilling that.”

A life with purpose. What could be better?

Photos by: Ashley B. Nguyen